History of Curling in Portland 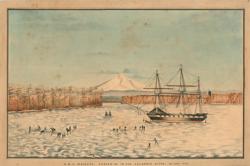 Curling first came to the Portland, OR area in the winter of 1847 when the HMS Modeste, an 18 gun British warship, spent a few months frozen in on the Columbia river near Ft. Vancouver. Four officers from the Modeste bested four locals from the Hudson Bay company in a 3 game series on the frozen river on January 26, 1847. They used locally found stones and a makeshift rink only 22 yards in length. During the after-match partying they cordially instituted the Vancouver Curling Club, the fate of which remains a mystery today.

More than 110 years later, in September of 1962, Harold Mahnke, a retired school teacher from Superior, WI, re-introduced the ancient sport to Portland by holding a series of curling exhibition matches at Lloyd Center Ice Rink near downtown Portland. Mahnke then established the Portland Curling Club which hosted games on rented ice at the Silver Skate Ice Rink in Portland for 20 years until the demise of Silver Skate in 1983.

Nearly 20 years later, in 2002, Doug Schaak, a newly arrived English Professor with roots in curling dating back to his childhood in Rolette, ND teamed up with Cheryl Doucette and an enthusiastic group of volunteers to form the Evergreen Curling Club. They rented ice at Mt. View Ice Arena in Vancouver, WA and eventually at Lloyd Center to provide leagues, bonspiels and other events in the Portland area for 10 years through the Spring of 2012. Highlights of this period included Rose Bonspiels attracting curlers from across the USA and Canada, an exhibition match with the 2006 Olympic Bronze Medal team, and a 2007 re-enactment of the 1847 HMS Modeste Match with curlers in full period costume.